Copying in the Prado Museum: a training challenge

“When you reproduce a masterpiece you are fighting against your temperament and his. Sometimes you have to control yourself” that’s what the painter Rosa Pérez Valero told us a few days ago in her studio located in a penthouse in Madrid. By her side was Ana Gulias Velázquez, born in the Canary Islands and from Madrid by adoption. They both go almost every day to the Prado Museum and perfectly know its collection because they have been copying for years with their brushes the masterpieces of Tiziano, Velázquez, Correggio or Juan de Arellano (just to mention some of them).

Painter’s palette in hand and through the limitations that the institution sets up, both Rosa and Ana who belong to the group of 16 copy artists authorized by the Prado have made from their work a way of living. From Monday to Thursday they stare at their masters and from Friday to Sunday they store their canvas and their studio easels lent by the museum. Space needs to be given to thousands of tourists visiting the galleries of the museum, designed by Juan de Villanueva at the end of XVIII century and enlarged by Rafael Moneo in 2007. 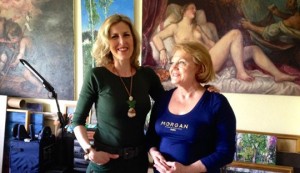 At her 70 years old, Pérez Valero has seen her painting go through different styles “I don’t follow the fashion”, she says; now she is in an impressionism step close to pointillism. On her behalf, Ana has in mind to continue working in the hyperrealist technique that gave her good results as in “Amazon” and “Looking for crabs”.

What about her next challenges? One is to shape the colours of the nightfall upon Madrid’s skyscrapers. The second one is to continue with her successful trompe l’oeil in her copies which are a delight for the visitors at the museum. “What always motivates me is the research of beauty. Painting in the Prado’s museum is a luxury, it’s training with the Masters” Rosa adds: “Perhaps in 200 or 300 years some of our copies could end up exposed in the museum galleries”. Tell Fortuny.

Listen to the whole interview here.

The other artists of the Prado

Since its opening in 1819, copyists of all over the world have come to the museum to improve their technique. Nowadays, only 16 fortunate can perform copies along with the originals.

The copyist Ana Gulias painting “The surrender of Breda” of Velazquez in the Prado Museum.

Her paintings are not exposed in a museum. They are not Goya or Velazquez but, when she has to face a new canvas, those great masters of painting are precisely the ones that guide her brush strokes. 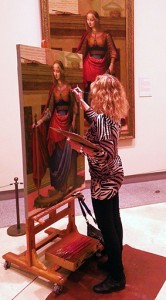 Since the Prado museum opened, almost 200 years ago, painters from all over the world have come to their galleries to imitate their most famous authors. Besides of being the best way of improving the technique, for some of the 16 copyists that are admitting by the institution it is also a way of earning their lives through the orders they receive. “For us this is a showcase to the world. It’s better than any gallery because lots of tourists come from all parts of the world. The painter’s life is very lonely, but there’s a time when you need to go out and be in contact with other people to earn a living” claims Ana Gulias.

Attracted by her brush strokes and by her fusion of colours, this bachelor in Fine Arts started copying impressionists. “When you only have a single painting teacher, you might take the risk to end up being his own clone, but if you are inspired by many, you can reach your own style”. As time goes by, more orders were increasingly requested. Even though she argues that there’s not a unique criteria when you have to give a price to your job, time spent, the thoroughness and the degree of detail are some of the aspects that you need to have in mind when you are valuing a copy which price can go from costs and expenses to thousands of Euros. 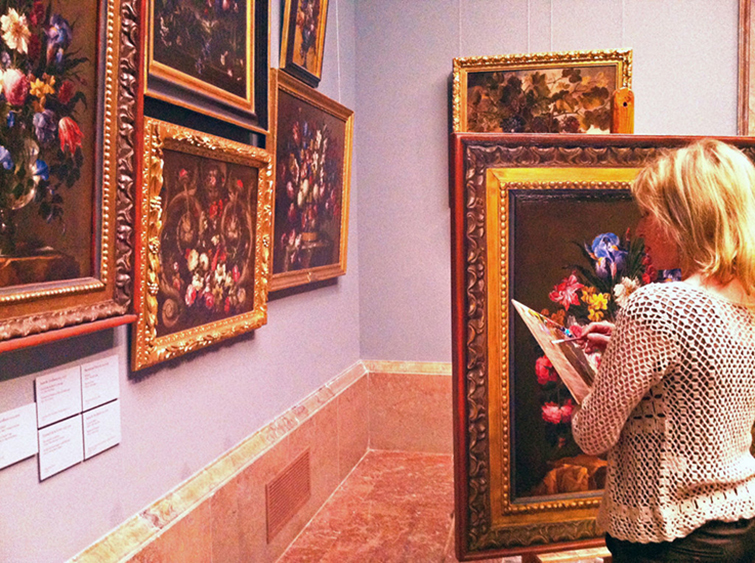 Ana Gulias copying one of the masterpieces of the museum, framework included.

For some time, her copies have also acquired an unusual added value. “The framework is essential in some masterpieces, that is why I thought I could also paint it”. Using the “trompe l’oeil” technique, a French word which means “fool the eye” gives my paintings a personal touch. “By painting the picture in three dimensions, people can believe the framework is real. A security guard got very scared when he believed that the original painting was taken down from the wall and put in the studio easel”, she explains.

As far as she remembers, Ana assures that the painting in which she had suffered the most was “The Surrender of Breda” of Velazquez, not because of a matter of difficulty but rather by the great influence of public. For this reason, nowadays popular paintings such as “The Garden of Earthly Delights” from Bosco can’t be copied anymore. Those who could do it in the past were Picasso, Sargent and the Madrazo who were also copyists in the museum.

Since Charles III opened the Prado in 1819, the copyists have been the most frequent visitors to the museum. “When it was founded, the Prado was planned like an Academy so that the painters could be able to come to learn. Tourists could only enter once a week” claims Cristina Barroso. The person in charge of the copyists’ office still has in her desk regulations of 1836 in which this activity was already regulated.

Now the requirements have been tightened, she is in charge of supervising the activity of the copyists. Besides the one hundred Euros they have to pay for each painting they want to copy, the painters need to fulfil some rules. “Only one person per room and as the museum provides all the canvas and the studio easels, the dimension cannot be over one meter thirty, which is the length of the elevator”, says Cristina.

While the copyists are working, each Friday the museum keeps all their canvas in a room with no access to the public. On Monday, when they come back to their room, they would find again their copy in their studio easels to keep on treasuring the secrets their masters entrust them from the wall.

Who can afford this privilege? The best alternative is to entrust it to coyists. Professionals that started by imitating the technique of the masters and work nowadays under commission.

This is not a museum, but we can see plenty of Velazquez, Greco, Goya, Rubens… well, perfect copies of them.

Every day Ana goes to work to the Prado Museum with her painter’s case. She usually works under commission.

The Prado is the only Spanish Museum that welcomes copyists to work. The regulations to do so get stricter every year. Only 16 can work in the Prado premises at the same time. The access to some of the most emblematic masterpieces is forbidden and copyists have a very restricted space to work, so they don’t disturb the visitors.

A copy cannot leave the museum until it is finished, it usually takes a month and a half. Then, these reproductions of the great masters’ works become part of the decoration of the houses of art lovers.

Secrets of a copyist

Ana Gulias goes every day to The Prado Museum to copy the pictures of the great masters. 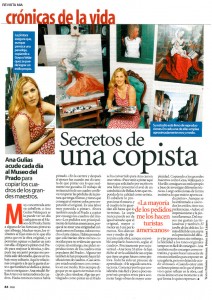 Very concentrated before her easel, Ana Gulias Velázquez can be seen any day in the Prado Museum, copying some of its most famous paintings. Many times, visitors pay more attention to her painting rather than to the original work, they give her their opinion or chat with her. “I started painting at the Prado to improve my technique and then I loved it because, not only it allowed me to work outside my study, which is a very lonely job, but it also helped me interact with art lovers or painters which is very enriching for me.” Ana studied Fine Arts and is an expert restoring paintings.

“After my studies I realized painting was what I really loved doing. The restoration work means recovering the losses of the painting and the damages of the canvas respecting the original work, which is very close to copying somehow”.

Many American tourists commission copies at the Prado Museum. Antiques and Classical pieces are greatly appreciated because of their shorter art history, reason why they want copies of the most famous masterpieces of the Prado. “Some have also proposed me to counterfeit paintings, but I always tell them I do not want to end up in jail” she laughs. The privilege of painting at the Prado has become almost a routine for Ana. To join the very few official copyists of the Prado Museum you have to apply submitting a written recommendation from a Fine Arts professor granting your quality as a painter.

The easel is provided by the museum and the canvas is kept there until the painting is finished. The copy can never be the same size as the original; it should be at least 3 cm bigger or smaller than the original. Copyists have a month and a half for each work, but may extend to three, according to the complexity of the original. Ana is a young painter with a bright future ahead. It has been an intense learning process. “I followed a strict path, I started with what I considered easier and gradually overcame my own challenges to then get into more complex works. Copying the great masters such as Goya, Velazquez and Murillo gives you your own style based on different techniques. Then, instinctively, you select what you most appreciate of each artist”. Although she has faced almost every style, Ana has her preferences. “I love the Impressionist and Flemish paintings. From the Prado Museum I specially like Las Hilanderas (The Spinners) and The Garden of Earthly Delights. The hardest thing about copying is the accuracy of the drawing and proportions; however, matching the original colors is not easy to achieve either.” Ana also paints portraits under commission, she works on a series of children’s portraits to exhibit in an art gallery, and keeps going to the museum. “When I face a new work to copy I try to put myself in the painter’s shoes and try to imagine what he really wanted to reflect in that particular work, what he felt right then and what he wanted to achieve and to express.” 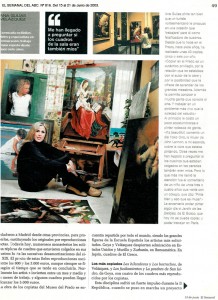 Ana Gulias paints so well that an American tourist suggested her once to work for him as a counterfeiter. She has painted nearly forty copies since she started working at the Prado Museum seven years ago (an average of five or six per year). “Copying at the Prado Museum is an authentic privilege, because you become closer to the author of the masterpiece, and it also offers you the possibility to learn from the Masters. Moreover, it gives you the opportunity to meet a lot of people who love art and it allows you to work in a lively environment, which is better than the loneliness of the studio”.

At the beginning, it was hard for her to get used to paint surrounded by people. “It’s beautiful”, said once Yoko Ono, John Lenon’s wife, about her painting.

Sometimes, people have come to ask me if the paintings hanging on the walls were mine. But what most caught my attention was what a three or four-year-old child, on a school trip said – she paints well, in spite of being a woman.”

She would like to paint The Garden of Earthly Delights, from H. Bosch, which nowadays cannot be copied, and she would love working in Paris.

If you are interested in any of my work or wish to commission a picture or portrait, please contact me. Thank you very much.